What is it?
Carbon offsetting can be a hard idea to come round to, but is in reality quite a simple concept. Schemes allow individuals and companies to make a financial contribution to environmentally friendly projects around the world to stabilise their own emissions, be it from travel, day-to-day energy use or material consumption. These may take shape in a variety of forms, including the deployment of clean energy technologies, purchasing carbon credits and tearing them up, or, in a more direct application, planting trees to soak up CO2 in the atmosphere. The costs vary, but will usually equate to around £8 per tonne of carbon offset. For example, a flight from London to Sydney would produce around 2.64 tonnes of CO2 per passenger, so would cost around £22 to offset.

Why is it done?
Carbon offsetting may seem like an unnecessary cost to a holiday or business, but it’s a simple, effective and cost-efficient to lessen our negative impact on the world. Our carbon emissions from fossil fuels alone have risen substantially since the beginning of the 20th century, with the warming effects visible now and in the future. However, the positive effects of carbon offsetting are not only environmental. Several governments around the world have introduced incentives for companies to reduce their carbon emissions. The UK government, for example, offers tax relief on the Climate Change Levy (CCL) if steps are taken towards reducing emissions by entering a Climate Change Agreement (CCA) with the Environment Agency. 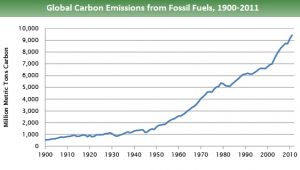 KLM, the Dutch Airline, have taken it into their own hands and have developed a comprehensive scheme to offset the emissions from their flights. They have partnered with a Ghanaian enterprise that has developed a special coalpot which is 40% more efficient than its traditional counterparts, resulting in annual savings of around 300,000 tonnes of carbon emissions each year. This has also curbed deforestation, as less coal is needed to fuel the stoves.

This shows how carbon offsetting has changed from just planting trees, which has a short-term effect. Carbon offsetting has moved to more innovative solutions, helping people offset their carbon in ways that will change their lives and their carbon output in the long term.
You can also look to reduce your footprint on the world. Think about it next time you travel or turn the heating on, as there could be a cost-efficient way to reduce your impact on the world. If you would like to find out more about your or your organisation’s emissions, please get in touch via our contact us page.

Please log in again. The login page will open in a new tab. After logging in you can close it and return to this page.